The Times has reported more than 40 Hillsborough County schools desperately need new air conditioners. They recently published this article about the A/C issue, hot classrooms, and mold in schools.

When Plant High School opened its doors after summer break, teachers discovered mold in the auditorium, soggy posters falling off walls and copiers that struggled to come back to life after sitting in high humidity for two months.

Christine Brady Corum saw so many posts about sweaty students on the Fishhawk Area Neighborhood Facebook page that she began purchasing box fans for Randall Elementary School and launched a community-wide fundraiser.

“Trending” on the Times website at the time of this article reflected that whoever still reads the Times was interested in this issue.

But the Times editorial board either does not read their own “news” or they do not care about the school infrastructure needs or…..they are blinded by train headlights.

The Hillsborough County School Board wanted their 10-year one-half percent sales tax hike on the November ballot. They are negotiating with OPPAGA to get their required audit that they requested in June, weeks before All for Transit requested theirs, done by the pre-election deadline.

The School Board is pursuing a one-half percent tax increase for 10 years versus the greediness of former hedge fund manager Jeff Vinik, his special interests allies, and transit advocate sycophants demanding an egregious full one percent tax hike boondoggle for 30 years.

The Tampa Bay Times recent Editorial: Hillsborough School Board foolishly rushes tax vote is one of the most vicious opinion pieces we have seen the Times ever publish.

The Times sounds like a whiny toddler pitching a temper tantrum when they can’t get a new toy. The public knows the Vinik funded All for Transit PAC jumped in front of the School Board’s audit request to get their required OPPAGA audit done first. 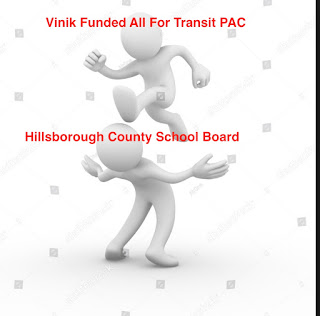 How did that happen? Time for an investigation to find out.

The Times’ vicious greed is unbecoming but it confirms who the Times is beholden to and their abject bias.  Jeff Vinik helped bail out the Times last year and the Times is financially beholden to him—the paper’s debts are still pegged at more than $100 million with no visible way out.

For all intents and purposes, Vinik owns the Times.  They have promoted his flailing, far-behind-schedule downtown development with the big yawn moniker, “Water Street Tampa.”

Cascade Investment Group, based in Kirkland, WA and owned by Bill Gates but operated by a former Boston business crony of Vinik, financed the project.  The Times insists on referring to Water Street as the “Gates-Vinik” development.  In all probability, Bill Gates does not know who Jeff Vinik is.

How bottomless is the on-its-knees Times obeisance to Vinik?  So extreme that the needs of Hillsborough County public school students and teachers are riding the caboose on a train to nowhere.

The Times got mad at the school board and pitched a temper tantrum. To the paper, the end—forcing taxpayers to unnecessarily spend billions on costly trains/transit—justifies the means, even if it shafts public education in Florida’s fourth most populous county and the country’s eighth largest school system.

How dare anyone get in the way of their Greed over Need. Any opposition to the Times-Vinik transit tax hike must be shut down and we’ve witnessed the lengths that duo will go in order to save their respective enterprises.  We know that over the next two months, the Times will accelerate its disinformation campaign to promote this regressive tax.

The Times refuses to acknowledge the existence of  a proposed transportation plan that will meet the area’s needs with no new taxes.  All to save Vinik’s development and, by extension, the Times.

The Times needs an intervention.  It will come through loud and clear from voters in November.