Highest sales tax in Florida would bail out a beleaguered Vinik and his Underwater Street development.

By Dr. Jim Davison, from Eye on Tampa Bay

Jeff Vinik, the former Boston-based hedge fund manager that reinvented himself in Tampa, and his cronies have bought their way onto the November ballot by spending more than a half million dollars.

The Vinik referendum, if passed, would increase the sales tax in Hillsborough County to 8 percent, highest in the state.

The Tampa Bay Times is already pushing a false narrative on an unsuspecting public.

Rescuing Vinik and freeing up county funds for a billionaire’s ballpark in Ybor will come at the expense of anyone with children in K-12, educators, low wage workers, retirees and the disabled on fixed incomes, anyone living in Temple Terrace, Plant City, or unincorporated Hillsborough County, minority communities in East Tampa that will be displaced by light rail planned between the University of South Florida and downtown Tampa, opponents of urban sprawl, true environmentalists, local big box retailers, the tourism industry, and any citizen opposing corporate cronyism.

Vinik leap frogged over the Hillsborough County School District to have a state mandated audit of the programs receiving the $15 billion tax plan. The school board had already informed the state’s Office of Program Policy and Government Accountability that they were going to put a 1/2 percent sales tax question before the voters in November. The school district wanted its tax hike for much needed A/C replacements, capital improvements and hardening of the schools for security.

Janet Tashner, OPPAGA’s general counsel told the Hillsborough school district in April that a performance audit would take up to six months—-and that involved less money and only one public entity.

Several hundred thousand parents, students, and teachers want to know how Vinik was even able to “fast track” his request to get  his audit done in record time before the September 7th deadline.

A performance audit is a thorough examination of your operations, performed in accordance with Generally Accepted Government Auditing Standards, also known as Yellow Book standards. How does any performance audit of a complex $15-18 BILLION spending plan across multiple spending programs in multiple agencies get done in a few weeks?

Vinik’s rail cartel he lined up to ensure his tax hike gets on the ballot is not just anti-public policy but smacks of greed.  I have expected such an ill-conceived plan to defraud the people of Hillsborough out of $15 billion for their own purpose, but to step over children, teachers and putting their safety at risk was I thought a step too far even for them.

To Vinik and his deep pocketed allies pushing this tax, providing the funding to support the tax hike effort is just business hardball. It has more to do with their bottom line then anyone getting to work on time – which their plan will never do.

The corrupt media maintains the plan calls for “no rail”, yet Vinik’s All for Transportation PAC stated it was based on the MPOs 2040 LRTP. The Tampa Bay Times recently reported:

That is the MPO’s 2040 Long Range Transportation Plan one percent tax hike funding scenario that contains billions of dollars in rail construction. The modeling scenario is based on costly rail. Vinik’s plan actually sets aside more for rail than the MPO did.

The fact that the plan contains rail was confirmed by Times reporter Christopher O’Donnell when he interviewed me Wednesday to get my take on the petition qualifying. Not only did he confirm there was rail in the plan but that there will be enough money so they don’t have to get money from the “feds or state” to build it. 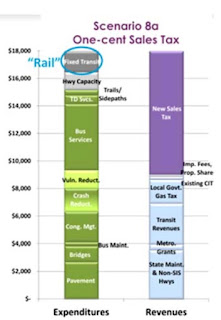 Vinik’s massive tax hike forces taxpayers in Hillsborough County, the vast majority of whom live in unincorporated Hillsborough, to pay for 100% of the capital costs for the downtown Tampa cronies’ trains. The burdensome regulations were intentionally built into the petition language by Vinik and his downtown allies.

The backers of Vinik’s tax hike plan know the plan can never qualify for federal funds. The recent regional premium transit plan facilitated by HART clearly stated that and the FTA gave the plan (which is essentially unchanged from 1996 – it simply keeps getting recycled) a poor rating in 2005 making it ineligible for funds. The 2014 AECom report transit assessment stated the ridership and densities do not exist in Hillsborough to qualify for FTA federal funding.

The question now is “can Vinik, Sykes, Tyler Hudson and all the other downtown elite with their media megaphones and PR firms in tow buy the Election? Can the downtown Tampa cronies take $15 billion, most of it from the people in unincorporated Hillsborough County, and enrich themselves? They will let nothing stand in their way including the truth because this is just business. It is literally a train robbery.

Local media reports have purposely understated the proceeds of the massive tax hike; the most accurate estimates declare it will take at least $15 BILLION out of local taxpayers pockets over 30 years.

The public will never see my alternative transportation funding plan that uses revenue numbers actually vetted by the county and that the county commissioners took unanimous action on. Local media refuses to report about my transportation funding plan that could provide the same or better congestion relief, fund the MPO’s LRTP, build sidewalks and trails, improve safety and decrease vulnerability BUT NOT RAISE YOUR TAX.

The local media blackout of my plan was confirmed by O’Donnell Wednesday. The Times reporter stated they will not print my alternative plan because “it is not newsworthy”.

I have lived in New Tampa for 25 years. I co-founded and was president of the New Tampa Transportation Task Force and represented the city of Tampa on the Transportation Committee of 99. I have served on the county Citizens Advisory Committee, the Indigent County Healthcare Board and the Emergency Medical Planning Council. I have been involved with local transportation efforts for over 20 years and recently assisted in the county’s $600 million 10 year transportation program financed by annual increasing ad valorem revenues.

My funding plan renews the CIT tax for fire/rescue and police and gives the Hillsborough School Board the opportunity to be successful in their sales tax initiative.  Not newsworthy?

Supporters of Vinik’s tax hike will not reveal how much of the money will be paid by the taxpayers in various areas of Hillsborough county nor that 51-53% of the revenue will be spent within the city of Tampa which contains only 27% of the population. They will not talk about how regressive the sales tax is or how it is going to gentrify and displace the very people they say they want to help.

So let the lying begin – again.

We will be here to expose them.