All for Transportation’s $16 Billion tax hike was created by a few urbanist transit advocates over drinks. Their campaign funded by special interests sold their creation as a 30-year “plan” to fix transportation in Hillsborough County.

But there is no plan for implementing anything.

The MPO’s  20-year, 2040 long-range plan created in 2014 does not include ride-share, the sharing economy, autonomous vehicle or connected vehicle technology. The MPO’s 2040 plan excludes the use of value capture now being required by the FTA to pursue federal transit grants.

We warned that new road capacity intentionally had zero dedicated funding for 30 years in All for Transportation’s $16 Billion tax hike. As we previously posted, questions are suddenly being asked about the $812 million, 10-year road funding plan for unincorporated Hillsborough County that was approved by a previous Board – after the massive tax hike passed.

The Hillsborough Area Regional Transportation Authority (HART) saw its overall ridership decline 10.3% over the last fiscal year according to this Tampa Bay Guardian post. Ridership has been declining for years. 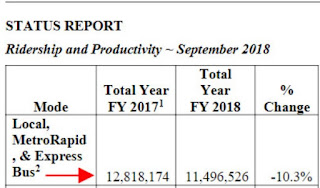 Now $7-8 Billion or probably more of new taxpayer dollars will go to HART. At least $126 million will start flowing into HART’s coffers in 2019.

HART has no infrastructure for managing the billions headed its way. Seward is spending about $100K to hire an accounting firm so HART can appropriately account for the flood of new tax dollars beginning in January.

Seward said spending priorities include expanding five existing routes to 15-minute frequencies and fast tracking 30 new buses. That may also include reviewing all their bus stops and adding needed benches and shelters.

Seward said HART will need a new maintenance facility but he recommends using an existing footprint of property that HART already owns. That would save HART $15-20 million in land acquisition, he said.

HART will basically have to tear up its 10-year Transportation Development Plan and create a new one, meaning hiring more consultants and doing extensive public outreach.

A good chunk of new tax dollars will go to consultants, PR firms and growing the size and scope of the transit bureaucracy. Those groups, along with the bankers and the financing community seeking to bond out huge portions of the tax dollars, are probably already lobbying to get a piece of HART’s massive tax hike pie.

Seward believes that the CSX lines will be made a priority as advocated by County Commissioner Pat Kemp. With newly elected commissioners Kimberly Overman and Mariella Smith replacing Stacy White and Sandy Murman on the HART Board, expect rail, rail and more rail to become HART’s priority.

All for Transportation’s priority is light rail from downtown to the airport giving Vinik, Tampa’s Gordon Gecko, a boost to his flailing development.

Janet Scherberger, who works directly for the Tampa International Airport CEO Joe Lopano, was an activist for the tax hike along with Aviation Authority Chair Robert Watkins.  Both are directors of the “nonprofit” Keep Hillsborough Moving, Inc. that was connected to the All for Transportation PAC.

HART could pursue federal funds but, Seward said, doing so requires meeting all federal regulations and lengthens the implementation time. Pursuing federal dollars can add years and years to a transit project and raises the cost of any transit project, he added.

HART could decide to fully fund the costly rail/transit projects with its new billions and not pursue any federal funding, meaning federal ridership estimates would not have to be met.

However, if HART fully funded the rail projects locally, would HART still have to abide by federal environmental, social justice and Title VI regulations? HART is a federally-funded transit agency that receives federal transit funds every year. What are the issues associated with HART managing billions of non-federal assets with federally funded resources?

Seward said the required performance audit to get the referendum on the ballot was the fastest he had ever seen.

Florida Statute 212.055 Section (10) was added in this year’s legislative session. It requires a performance audit be completed and the report published at least 60 days prior to the election for all local discretionary tax hike referendums placed on the ballot. The statute requires the performance audit to exam the program that will be funded by the new discretionary sales surtax placed on the ballot.

HART has no such program. HART does not have any program associated with the billions that will be handed to them by the tax hike.

The state audited current operations and past performance for how HART “may” handle new programs.

Auditing HART’s current $78 million operation to a new $200 million or more yearly operation is trying to compare apples to oranges. How does such an audit fulfill the statute’s requirement that the audit must examine the program(s) associated with the new tax?

Hillsborough County has the same issue. There is no program at County Center associated with this $16 Billion tax hike. The state auditor simply audited the operations of the county’s Public Works department. How does that audit fulfill the statute’s requirement that the audit examine the program(s) associated with the new tax?

The $16 Billion tax hike funds multiple programs in multiple entities. The tax hike will provide funding to the County, city of Tampa, city of Temple Terrace, city of Plant City, to HART and to the Hillsborough MPO.

The state auditor explained that Hillsborough County and HART were the only ones audited because they were the primary recipients.

The city of Tampa will receive more than a billion dollars of these new tax dollars over 30 years but was not audited.  Any entity receiving a portion if the Vinik tax should have been audited.

Go to about 16:35 in this video clip of the State Senate session where Senator Kelli Stargel clearly states the intent of the performance audit is to audit the program.

It appears the performance audits completed could not meet the required statutory requirements.

Seward said that last week was the first time any reporter from the Tampa Bay Times asked him anything about the tax hike.  The Times, who was bailed out of an economic squeeze by Vinik, was too busy providing All for Transportation free media to ask questions before the election.

There are disagreements about the language of the Charter Amendment itself among lawyers of the government entities who will be receiving the tax hike monies.

With ballot language issues, how did Supervisor of Elections Craig Latimer approve putting the charter amendment as written on the ballot?  Whose responsibility is it to ensure any county referendum placed on the ballot is legally sound?

The tax hike initiative did not undergo any deliberative process. There was no consensus for what transportation and transit projects will be funded or when they will be funded.

Jeff Vinik hosed Hillsborough County taxpayers with a $16 Billion tax hike that has no plan.